In my attempt to increase the range and quality of my ham radio contacts, I’m attempting to get my antennas up and away from my house. In order to do that, I’ve purchased an interesting little hack from a local ham, Carl
KM6LIQ, who also happens to be the webmaster of our Humboldt Amateur Radio Club! Carl has devised a way to create strong non-destructive connections between PVC sections without having to melt anything!

Basically, his method to reuse old 2″ PVC he already had by inventing a connection kit. The kit uses little plastic wedges to connect PVC sections together. A smaller diameter PVC pipe with slits cut into it becomes an insert to form a pressure fit. You wedge the small plastic pieces into the slot which expands the end of the inner PVC just enough to take all the wiggle out of the joint. Then, using the hose clamps, you force both inner and outer pressure on the next section of PVC

Since I didn’t want to use guy wires to stabilize this beast, I only used three sections of pipe. This got me 27.5 feet up off the ground. I then used a small pulley wire tied to the top of the mast and some 5/16″ nylon rope to use as a halyard. I also attached a small cleet about 4 feet up off the ground so I can tie off the rope after raising my center conductor.

Finally, I used a little gaffers tape to tamp down the extra hose clamp ends. This gives the finished mast a nice professional-ish look. Of course, I’ll most likely use something like a Lark’s head knot to attach the antenna itself.

A New Antenna for a New Mast

Before I even raised this thing up, I ordered the antenna that I’ve been thinking about for quite some time: The G5RV Jr. I ended up getting the True Talk version instead of building my own for a few reasons: I needed some more coax to go with this antenna, and True Talk sells enough with the antenna to create a air choke or ‘ugly balun’ as well. It also is very well constructed and completely sealed to the elements, which will be useful in the moist Humboldt nights. This also gives me the chance to do A/B testing between my 20 meter dipole and this new wire antenna. This antenna is yet to arrive, but since I can get fresh antennas up the mast even after it’s erected, I think I’ll do just that!

I’ll have to install the G5RV Jr. as an inverted V in order to have enough room to put it in my yard. I’m also not positive where both legs of the antenna will go. One side has plenty of room down the fence line, but the other side may have to cross above the roof my house. Maybe I might be able to set up a second mast across the alley from my house and attach an end there, but that might be more problems than it’s worth. 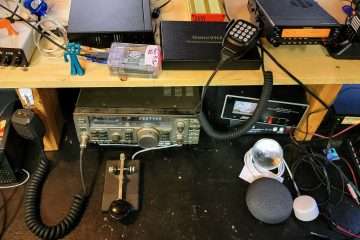 Share this article Hamming It Up In the Living Room I’m not leaving my shack behind, but I am improving how I operate digital modes. I’ve recently moved a computer around the house, freeing up Read more… 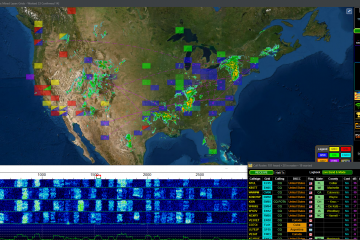 Share this articleMaking contacts and hunting for elusive gridsquares is now a joy! When you have a task as data intense as FT8 contacts, what you need is a really good tracking system. It needs Read more… 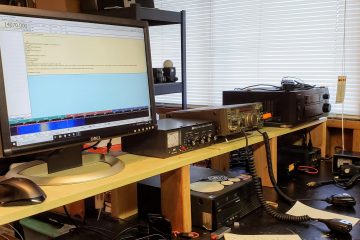 Last Sunday, the Far West Repeater Association held a swap meet at Scotia, CA, which I attended. I was able to buy an HF rig for $50!